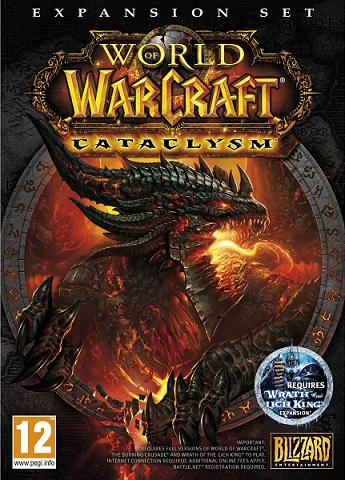 The Cataclysm is the latest threat to the World of Warcraft, where Deathwing, the Aspect of Death,
has waited and recovered in Deepholm, carefully watching for the opportunity for one last strike at
Azeroth in an effort to reduce the world to a burning hell.

World of Warcraft: Cataclysm follows The Burning Crusade and Wrath of the Lich King as an expansion pack for the most popular MMORPG of all time. Players can experience both Kalimdor and the Eastern Kingdoms like never before following Deathwing’s attacks which literally changed the world. The destruction can be viewed on foot and also from the air for the first time, as players gain the ability to fly over the original continents.

The Alliance and Horde continue to battle evil and each other, and have each recruited more firepower within their ranks, in the form of the worgen and goblins respectively, each boasting new models and unique racial traits. Existing characters can take advantage of new talents, zones and skills on their way to the increased level cap of 85, while profession and lore fans can now indulge in archaeology to gain a greater understanding of the world around them while picking up valuable items along the way.

As would be expected of an expansion pack for World of Warcraft, Cataclysm requires both The Burning Crusade and Wrath of the Lich King in order to play.