Red Dead Redemption is an open-world, third-person, action-adventure game set at the tail end of the American West West era. Action takes place in the first few years of the twentieth century and revolves around the choices that the protagonist, former outlaw John Marston, is forced to make due to his blemished past. The game features a morality system assigning honor and fame points generated through the player’s choices. It also features Wild West themed mini-games, new targeting and cover systems, extensive horse riding abilities, a wealth of period specific weapons and more than 40 huntable animals.

Story
Red Dead Redemption is a Western epic, set at the turn of the 20th century when the lawless and chaotic badlands began to give way to the expanding reach of government and the spread of the Industrial Age. A follow up to the 2004 hit Red Dead Revolver, this game tells the story of former outlaw John Marston, taking players on a great adventure across the American frontier. 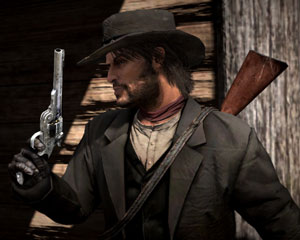 Choose to fight for honor or fame as former outlaw John Marston.

Gameplay
Red Dead Redemption is a third-person action-adventure game set a fictional open-world American Wild West environment for players to explore. Gameplay area types include frontier towns, rolling prairies teaming with wildlife, and perilous mountain passes – each packed with an endless flow of varied distractions. Along the way, players will experience the heat of gunfights and battles, meet a host of unique characters, struggle against the elements and animals of one of the world’s last remaining wildernesses, and ultimately pick their own precarious path through an epic story about the death of the Wild West and the gunslingers that inhabited it. In their travels throughout the territories of the gameworld players partake in a morality system built on honor and fame, where they gain or lose points in each area based on their actions. The game features an easy to use cover system, a variety of mounts and period specific weapons including a cattleman revolver, a mauser pistol, a repeater rifle, a sawed-off shotgun, a throwing knife, a lasso and more. Western themed mini-games are also available, including showdowns, gambling, hunting bounties, cattle herding and five finger fillet. 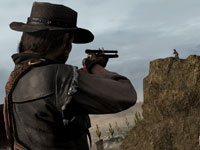 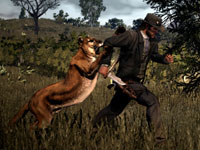 All the dangers of the period. 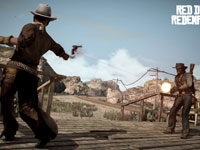 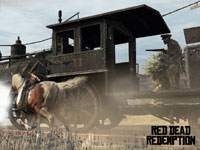 America, early 1900’s. The era of the cowboy is coming to an end. When federal agents threaten his family, former outlaw John Marston is sent across the American frontier to help bring the rule of law. Experience intense gun battles, dramatic train robberies, bounty hunting and duels during a time of violent change. Red Dead Redemption is an epic battle for survival in a beautiful open world as John Marston struggles to bury his blood-stained past, one man at a time.