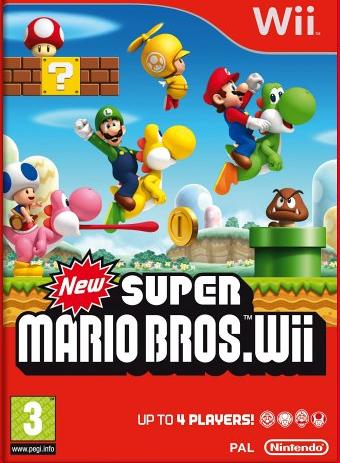 New Super Mario Brothers sees the player taking on the role of Mario, once again attempting to rescue Princess Peach from the clutches of Bowser. However, for the first time ever, up to three additional players can join in on the action as Luigi or either of the Toads, teaming together to take n all comers in special multiplayer modes.

The latest game brings the classic 2D styling of the Nintendo DS predecessor to the Wii, including updated motion controls using the Wii remote. Players can carry out amazing new moves in an effort to reach hidden level areas, or light the way with their own trusty torch, simply by pointing the Wiimote at different areas of the screen. The Wii’s unique controller also operates the propeller suit, a new addition that bestows the gift of flight on Mario and his colleagues. As always, Yoshi is also on hand to provide transport and innovative power-ups.

New Super Mario Brothers is the first Mario game to ever feature an immersive help system, where players can see how a level should be done in real time and even jump straight in to the action at a certain point.

The game features all of the hallmarks that made the original Mario games such classics, but now with the added enjoyment of true multiplayer teamwork.