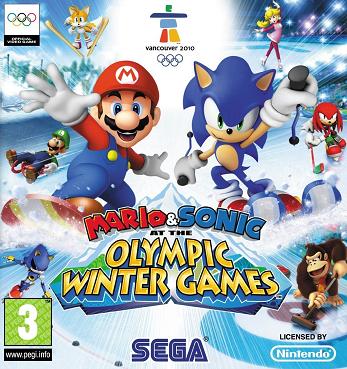 Mario & Sonic at the Olympic Winter Games builds on the success of the original title where two of the greatest characters in gaming history took on a range of summer events at the Olympics. Now they are back and accompanied by the likes of Tails and Yoshi. However, rather than athletics and
swimming, the characters are now tasked with bringing home the gold in a variety of winter events.

As with the game’s predecessor, players can test their skills at a range of realistic events, from ice hockey to figure skating. If that seems too easy to master, there are more outlandish events on offer, such as the Dream Ski Cross. This unique event takes obvious inspiration from the Mario Kart series and sees players racing across the snow with a variety of weapons and boosts in their arsenal.

The game is clearly aimed at offering multiplayer fun. Winter Olympics fans will enjoy the realistic events on offer, backed by an official licence. However, the real fun begins when players attempt the events that simply would not be possible in the real world! Both competitive and cooperative events are on offer, making for hours of fun.

The game also makes use of the Wii’s balance board, particularly in the snowboarding halfpipe event where it comes into its own. However, the accessory is by no means essential, with the standard Wiimote being a more than adequate substitute in every single event.