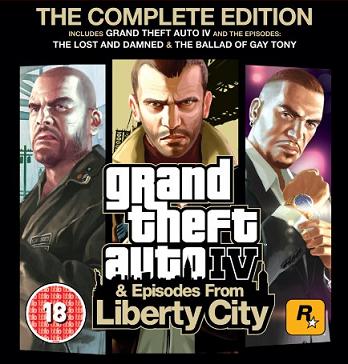 Grand Theft Auto IV became an instant classic upon release, setting numerous sales records and receiving some of the highest critical acclaim of any game. Players can now enjoy the game in all its glory in one great value bundle, including both the original and Episodes from Liberty City, a compilation of all downloadable content released since launch.

Players take on the role of Nikolai ‘Niko’ Bellic, who decided to leave his old life in Eastern Europe behind on a quest to live the American Dream. However, his plans soon turn awry when he discovers that life in Liberty City is not quite as rosy as he had been told and, needing to survive, he turns to the criminal underworld to forge both a reputation and a living.

The additional Liberty City disc is included in the overall package, either on the same disc as the original game or spread over additional discs depending on the format. It includes not only The Lost and the Damned but also the second episode, The Ballad of Gay Tony, between them offering hundreds of hours of additional gameplay. Alongside the games themselves, players can also enjoy a newly designed map of Liberty City and a refined game manual, all for a lower price than the original game cost on its own.

Grand Theft Auto IV and Episodes from Liberty City sold over three million copies between them in the UK alone, so the opportunity to own both together is an opportunity not to be missed.