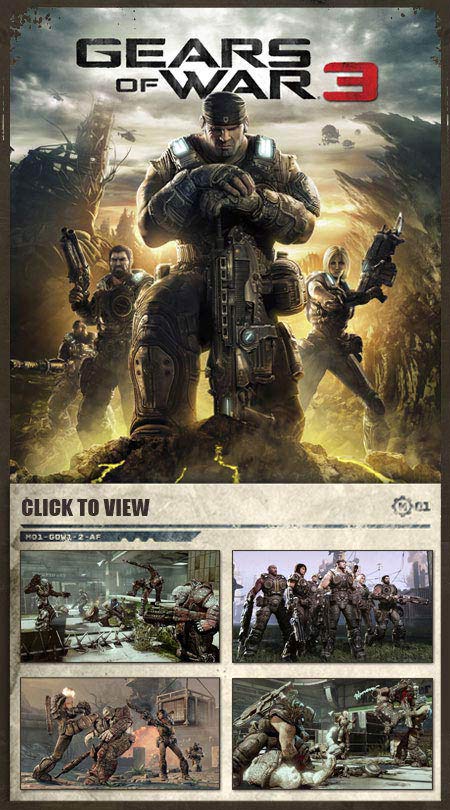 Gears of War 3 is the spectacular conclusion to one of the most memorable and celebrated sagas in videogames. Developed by Epic Games exclusively for Xbox 360, Gears of War 3 plunges players into a harrowing tale of hope, survival and brotherhood.

Product Description
In Gears of War 3, players fight on as Marcus Fenix, the grizzled war hero and leader of Delta Squad. Eighteen months after the fall of the last human city, the war against the Locust rages on. Meanwhile, deep beneath the surface, a fearsome new threat is infecting the planet from within. With survivors scattered and civilization in ruins, time is running out for Marcus and his comrades as they fight to save the human race.

The Gears of War series is one of the most popular franchises in Xbox history, with more than 12 million games sold worldwide, an upcoming film, New York Times best-selling novels and more.

About Gears of War
Published by Microsoft Game Studios, the Gears of War franchise has won over 30 “Game of the Year” awards, sold more than 12 million copies worldwide and redefined the third-person shooter genre for this console generation. The game has also inspired a full line of toys and collectibles, apparel, an upcoming film, graphic novels and a book series by New York Times best-selling author Karen Traviss. The Gears of War series is exclusive to the Xbox 360 videogame and entertainment system and its riveting multiplayer action makes it one of the most popular titles on Xbox LIVE. More information can be found at www.gearsofwar.com. Playing online card games allows you to get more of your online games – games like blackjack online, poker, baccarat and more. Enjoy playing them online against real people and sometimes even for real money.

Epic Games, Inc., based in Cary, NC and established in 1991, develops cutting-edge games and game engine technology, including the multiple million-selling, award-winning Unreal and Gears of War series, and the industry leading Unreal Engine 3 game engine, a four-time winner of Game Developer magazine’s Best Engine Front Line Award and Hall of Fame inductee. More information about Epic Games can be found at www.epicgames.com.