Assassin’s Creed: Brotherhood is an epic action game for PlayStation 3 set across a blend of present and historical time periods, that places the player in the role of the leader of a Renaissance-era guild of assassins out for vengeance against the remnants of the Knights Templar. Set primarily in Rome, this sequel to the critically acclaimed Assassin’s Creed II features returning characters from the previous game and includes new features such as the ability to command members of your guild in combat, a new arsenal of weapons and multiplayer game support in which players can assume different assassin characters. 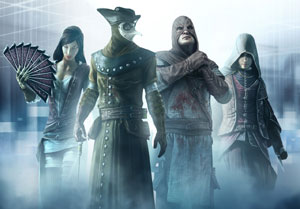 Command the members of your assassin’s guild in single player and become them in multiplayer. 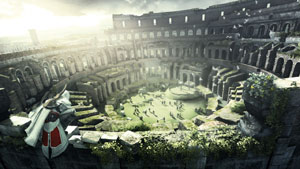 Explore the glory and faded grandeur of Renaissance-era Rome.
Story
Live and breathe as Ezio, a legendary Master Assassin, in his enduring struggle against the powerful Templar order. He must journey into Italy’s greatest city, Rome, center of power, greed and corruption to strike at the heart of the enemy. Defeating the corrupt tyrants entrenched there will require not only strength, but leadership, as Ezio commands an entire brotherhood of assassins who will rally to his side. Only by working together can the assassins defeat their mortal enemies and prevent the extinction of their order.

Multiple Ways to Play
Expanding on the game world woven across the first two games in the franchise, Assassin’s Creed: Brotherhood provides players with multiple ways to play. In single player mode you take on an engrossing campaign playing as Ezio, the hero from Assassin’s Creed II, who has now risen to the level of Master Assassin. Here players scour the expansive environment of Renaissance-era Rome, tasked with ridding the Eternal City of the continuing stain of the Templars and in the process ensuring the survival of the guild of assassins. You are not in this alone though. Additional AI members of your guild are at your command, and can be summoned to your aid if need be. In addition to this, for the first time in the Assassin’s Creed franchise players can compete with other would-be assassins in multiplayer action. In multiplayer modes players choose from a range of Assassin characters, each with their own backstory, unique weapons and assassination techniques. Choose your assassin character, utilize the virtual reality capabilities of Abstergo Industries’ Animus technology and match your skills against other assassins from around the world. There’s no time like now to join the Brotherhood.

Deadly Weapons Arsenal
Assassin’s Creed: Brotherhood features a wide variety of weapons, depending on the mode of play. In single player players primarily utilize Ezio’s weapons of choice, the hidden blade and crossbow, while in multiplayer modes players gain access to a wide variety of weapon, depending on the character they choose to play as. Examples of this include: the Axe, wielded by the Executioner; the Fan, used by the Courtesan; the Syringe, the tool by the Doctor; the Dagger, used by the Priest; the Switchblade, carried by the Prowler; and the Claw, used by the Nobleman.

Ezio Auditore da Firenze returns for the last time, in a direct sequel to 2009’s smash hit Assassin’s Creed II. For the first time ever in the series a fully-featured multiplayer mode will allow you to compete against your friends, as well as continue the centuries old battle against the Knights Templar.

The courtesan is just one of the unique new characters

Horse riding and combat is vital for some missions

Assassin’s Creed cityscapes are more amazing than ever

Take control of gun turrets on sea and on land

The multiplayer modes are no simple deathmatch game though, as you play the various different character classes against each other and play the role of predator and prey simultaneously. You won’t be working alone in the single player mode either, as Ezio commands a whole team of fellow assassins. Each has their own skills and weapons and it’s up to you to train and customise them, as they evolve throughout the game.

You’ll need all the help you can get too, with enemy soldiers that are more intelligent and aggressive than ever before, in the biggest and most action-packed historical adventure yet.

About the Developer: Ubisoft Montreal
Ubisoft’s huge development studio in Canada has created many of the French publisher’s biggest hits, including the Splinter Cell series, the modern Prince of Persia games, Rainbow Six: Vegas, Assassin’s Creed, Naruto: Rise of a Ninja and the Far Cry sequels and spin-offs.