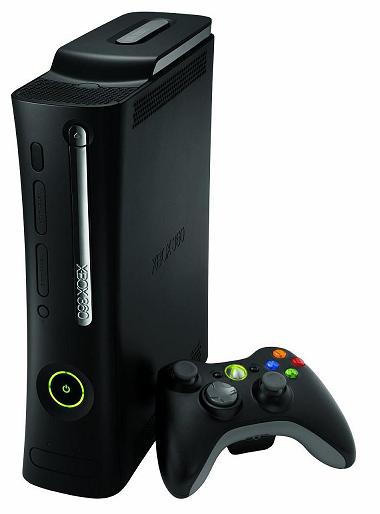 Previous generation Xbox 360 console. This is still greatly demanded especially in Eastern European and former Soviet Union markets, as well as Middle East, and and can be traded for a good price. Xbox 360 Elite console is mostly demanded if based on Jasper mother board, basically mid-2009 and later models. Earlier models based on other mother board brands, for example Falcon had problems with overheating and subsequently the console had relatively short life. This problem was solved in Jasper models. Many currently existing consoles in the market may appear used / store returns / refurbished. Less and less X360 Elite is available on the market and those in mint condition keep a good price.

Hundreds of awesome MP3’s, HD movies, and games can be stored on the Xbox 360 Elite gaming system’s 120 gigabyte hard drive, turning it into a superb entertainment system. And with features such as Last FM, Twitter, Facebook, and Sky TV coming soon, the Xbox 360 Elite may possibly become the center of entertainment in your household. The Xbox 360 Elite takes advantage of a new layout of buttons for its controllers. The start and back buttons now sit at the center, with the new Guide button situated right between them, providing the player with easy access to the user interface. You can access the interface to share digital content such as videos, audio files, and photos, plus connect with friends for online multi-player play or voice chat. The Xbox 360 can accept up to 4 wireless controllers at once, and also has 3 USB slots for wired controllers or for connecting digital devices such as PC’s, MP3 players, digital cameras, and more. There is also a new web-cam created by Microsoft that will work with the Xbox 360 gaming system.

The Xbox 360 Elite gaming console is customizable and very sleek, measuring around 3.3” x 12.2” x 10.2” and has a weight of around 7.7 pounds. The Xbox 360 Elite gaming system is powered by an IBM CPU that has 3 proportional cores that each run at roughly 3.2 GHz. An ATI graphics processor with 10 MB of DRAM is also integrated. This is enough power to draw 500,000,000 triangles in a single second. That equates to some of the most astounding graphics ever seen on a gaming console. The 16:9 wide-screen and HDTV 1080i formats are also supported.

The Xbox 360 Elite gaming system has a dual-layer DVD drive, which allows it to play both games and regular DVD’s. The Xbox 360 Elite’s 120 gigabyte internal hard drive allows it to not only store lots of data, but gives the system a backwards compatibility with games from its predecessor, so if you have games for the 1st Ps, you can enjoy them on this new console, with better graphics.

The Xbox 360 Elite gaming console’s controllers have a new layout of buttons. The start and back buttons are located at the center, and the exclusive guide button is situated right between them. The guide button allows for quick and easy access to the user interface. Once there, you can access your digital content, see which friends are online, and much more. In place of the traditional white and black buttons are the new “shoulder” buttons which are located right over the right and left triggers. The Xbox 360 Elite gaming console can accept up to 4 wireless controllers at the same time, in addition to 3 USB slots for wired controllers and/or streaming content from your PC, MP3 player, or digital camera. There is also a web-cam made by Microsoft that is designed to work with the Xbox 360 Elite.

The integrated Ethernet port lets you connect the console to a broadband internet connection and access Xbox LIVE Silver. Create your identity via the gamer card and Gamer-tag, talk via voice chat, and purchase maps, expansions, and other updates for your games through the Xbox Live Marketplace. Upgrade to a Gold membership to play online multi-player games, video chat with friends, and view game statistics. .