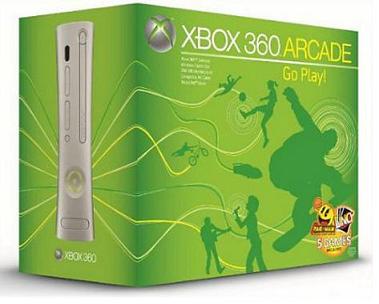 X360 Arcade consoles are previous generation X360 desktop consoles. They feature HDMI high resolution output, 256MB memory chip and X360 game controller. The difference from X360 Elite console is that Arcade does not include a hard drive. This console is still in considerable demand especially in Eastern markets, for Jasper mother board models. Price could be comparable or even higher than for newer X360 Slim 4G consoles.

Contents of the box:

* Connecting to Xbox LIVE is absolutely free of charge, and gets you access go add-ons for games such as characters and music themes, plus access to HD videos, as well. Join online multi-player games, connect with friends, and stream 1000’s of TV episodes and HD movies by subscribing to an Xbox Live Gold account (one month free).

** The warranty is for one month and includes parts and labor. Please send in the system itself, without any accessories. The console can be upgraded with the latest firmware for £10. All Xbox 360 gaming systems come with special warranty seals, so scammers, don’t even try. If a console is returned missing the warranty seal, you will not be refunded and the console will be confiscated.