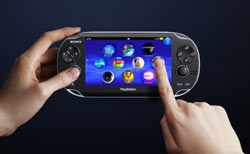 The newest, most powerful handheld gaming device from Sony yet.

Sony’s PlayStation Vita is designed to blur the lines between interactive entertainment and reality. Reaching beyond the capabilities of every handheld gaming console that has come before it, the PlayStation Vita will offer Wi-Fi and 3G* functionality, allowing for maximum connectivity. Its 5-inch OLED front multi-touch display will bring brilliant images to life and allow for a new touch driven navigational system, while the additional multi-touch pad on its back surface will allow users to interact with games and characters that they encounter within them with a simple movement of their fingertips. Additionally, services created specifically for the PlayStation Vita will be available on PlayStation Network. These services are designed to help users take their gameplay, as well as interaction with other gamers, to new levels. 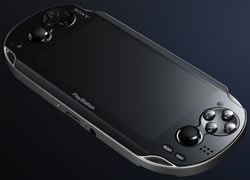 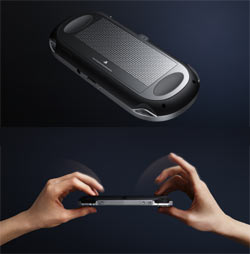 Easy-to-use multi-touch pad at the rear.

Extensive first and third-party support for games and add-on content.

In addition to containing the best in new handheld gaming hardware technology, Sony’s PlayStation Vita will provide users with the best in quality content. All your favourite game franchises are coming to the PlayStation Vita, including but not limited to Uncharted, LittleBigPlanet and Call of Duty. Joining these new offerings, players will also have full wireless access to the PlayStation Store. Here, via the PlayStation Vita’s improved 3G wireless capabilities, owners can download new game add-ons, movies, comics and PS One classics ported over for handheld play. The PlayStation Vita also features full backwards compatibility (via download) to all PSP games. Together this powerful merging of hardware and software is destined to create entertainment experiences unlike anything else available in the handheld gaming market.

* Connectivity dependent on version and subject to Wi-Fi availability and 3G coverage limitations.