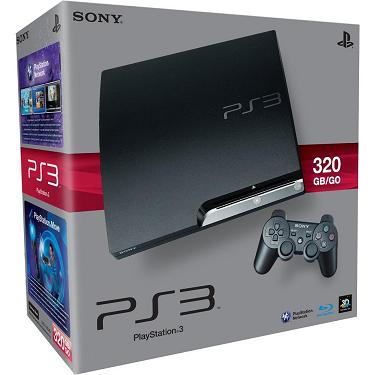 This is the flagman Sony PlayStation system. Sony PlayStation 320G console uses state of the art technology that bring to gamers an incredible gaming experience. The console features a 320GB hard drive that can store a massive amount of data, games, movies, music, pictures, etc. The consoles is equipped with very fast processor and mother board, and graphical accelerator, which allow a astonishing quality and realism of graphics and game involvement. The standard is supplied with Sony Six Axis Wireless controller and HDMI cable, for connecting the console to a HD 1080p TV.

The PS3 is back, and it’s slimmer than before. Though often referred to as the PlayStation-3 Slim, Sony refers to it as simply a PS3, since the larger version was phased out and only this slimmer version is being produced. Besides being 36% lighter, 33% smaller, and consuming between 34-45% less power than it’s bigger predecessor, it also has a hard drive that is available in 120, 160, 250, or 320 gigabytes.

The PS3 is quieter and cooler, owing to a new cell microprocessor, as well as the complete redesign of its cooling system. The PS3 also comes with support for CEC, which gives the user the ability to control the gaming system via HDMI through the use of the same remote that is used for the TV. Although the slim version of the PS3 has no backwards compatibility with PS2 games, Sony began re-releasing HD remastered PSP and PS2 games for the PS3 platform. PS2 classic games have been up for sale on the PlayStation Store since October, 2011.

Many different accessories have been developed for the PlayStation 3 Slim gaming console, ranging from Dual-Shock-3 controllers (featuring the vibration future of the Dual-Shock-2 used on the PS2, but without wireless capability), Sixaxis wireless controllers (lacking the vibration function), the Logitech Cordless Precision Controllers and Driving Force GT’s, the PlayStation Eye web-cams, TV adapters, and many more. The PlayStation Move motion-sensitive remote-like controller, similar to the Nintendo Wii’s remote, was released in mid-September 2010 in the USA and Europe, and near the end of October 2010 in Japan. Furthermore, on the 13th of October of the same year, Sony unveiled a surround sound speaker system for the PlayStation-3 Slim gaming console via official YouTube channel of the PlayStation.