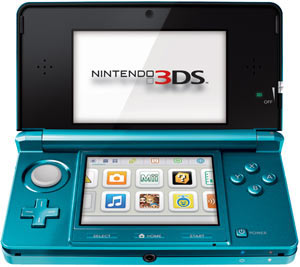 Nintendo 3DS is a groundbreaking hardware release that brings 3D gaming to the handheld market for the first time. The fourth major release in the DS product line, the Nintendo 3DS utilises 3D Slider functionality and an improved top LCD display to present a glasses-free 3D effect on compatible games, while giving players the option to moderate the effect as they see fit. Taken together with additional features including full analogue control in 3D game environments, motion and gyro sensors that transfer the movements of the handheld into the game, 3D camera functionality, an adjustable stylus and full backwards compatibility and you have not only a must-have system, but a revolution in handheld gaming. 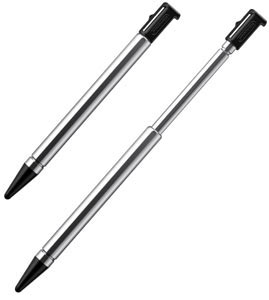 The telescoping stylus can be adjusted to the length you want. 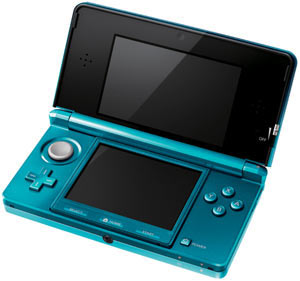 New controls including the 3D Depth Slider and the Circle Pad analogue control. 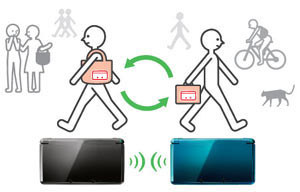 Exciting new functionality and software available on day one, including StreetPass. 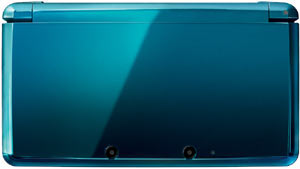 Introducing the Nintendo 3DS system. Experience incredible gameplay featuring real 3D graphics that do not require any special glasses or additional accessories. Nintendo 3DS is a breakthrough in portable entertainment, a truly cutting-edge piece of hardware that has to be seen to be believed.

Like previous handhelds released by Nintendo, the Nintendo 3DS console wholesale incorporates both an upper and lower LCD display in a clamshell layout. The lower screen features familiar Nintendo touchscreen technology, is 3.02″ (2.42″ wide x 1.81″ high) with 320 x 240 pixel resolution and is capable of displaying 16.77 million colors, but the groundbreaking upper 3D screen of the Nintendo 3DS system is where Nintendo opens up a whole new world of eye-popping gameplay possibilities. This 3.53″ display (3.02″ wide x 1.81″ high) is capable of displaying approximately the same 16.77 million colors, but with 800 x 240 pixel resolution. 400 pixels are allocated to each eye to enable 3D viewing. This stereoscopic 3D display gives objects within the gameworld a feeling of space and depth that extends far into the back of the screen. This amazing depth of field effect vastly increases the ability to see the position of characters and obstacles in compatible game, making many game experiences even more intuitive for all types of players.

A built-in 3D Depth Slider along the right side of the top display allows you to immediately adjust the intensity of the 3D settings on the Nintendo 3DS system to your liking. The 3D effect can also be turned down completely if the player so chooses. All Nintendo 3DS games and applications can be played in 2D, and look better when played on the Nintendo 3DS than any Nintendo handheld before it.

Portable play control reaches a new level with the Nintendo 3DS’ Motion Sensor and Gyro Sensor combination. Together these precision built-in features allow for new and unique gameplay mechanics as the 3DS reacts to real-time motion and tilt. Whether players are twisting their systems side to side, or moving it up and down, their motion-compatible Nintendo 3DS games respond instantly.

With the Circle Pad, located above the + Control Pad, Nintendo 3DS offers full analogue control in 3D game worlds. Combined with the touch screen, traditional buttons, camera and microphone input, and advanced motion control of the Motion Sensor and Gyro Sensor, the potential is extraordinary.

Along with a digital camera facing inwards towards the player, the Nintendo 3DS system features two outer cameras positioned along its upper edge when device is open. These two cameras see the world in 3D, much like the human eye, allowing for the creation of 3D photos – and a similar 3D effect to that seen in Nintendo 3DS games. All cameras feature 640 x 480 resolutions with single focus lenses that use the CMOS capture element and an active pixel count is approximately 300,000 pixels.

The adjustable Nintendo 3DS Stylus takes the idea of touch control to a new and even more user-friendly level. Once removed from the holder, the stylus length can be adjusted to your liking with a simple push or pull. Now anyone can achieve the optimum level of comfort while playing games that use the stylus.

Dock your Nintendo 3DS system whenever you are not using it in the included Charging Cradle to keep it powered. You can then leave the system on in Sleep Mode while charging, so that it can communicate via the SpotPass feature at any time of day or night.

Social and wired like no Nintendo system before it, Nintendo 3DS brings fellow players together in exciting new ways with StreetPass communication. Set your Nintendo 3DS to Sleep Mode and carry it with you wherever you go to exchange game data like Mii characters, high scores, and custom characters with other users you pass on the street. You control what data you exchange and you can exchange data for multiple games at once, making virtual connections with real world people you encounter in your daily life.

Nintendo 3DS includes SpotPass, a feature that lets Nintendo 3DS detect wireless hotspots or wireless LAN access points and obtain information, game data, free software, videos and so on for players even when the system is in sleep mode.*

Almost all existing Nintendo DS and Nintendo DSi games can be played on a Nintendo 3DS system in 2D. With backwards compatibility, your existing portable games look and play just as well.***

Nintendo 3DS utilises a frequency of 2.4 GHz, enabling local wireless communication among multiple Nintendo 3DS systems for game play and StreetPass, as well as access to the Internet through wireless LAN access points (supports IEEE802.11 b/g with the WPA/WPA2 security feature). Recommended distance of wireless communication is within 98.4 feet. This can be shorter depending on the environmental situation.

What’s In The Box

Nintendo jump into the world of 3D with the announcement of this upcoming 3D version of the DS console. Not requiring the user to wear glasses this handheld 3D experience will take games to the next dimension.

Included in the Nintendo 3DS box:

Viewers of this page also viewed: