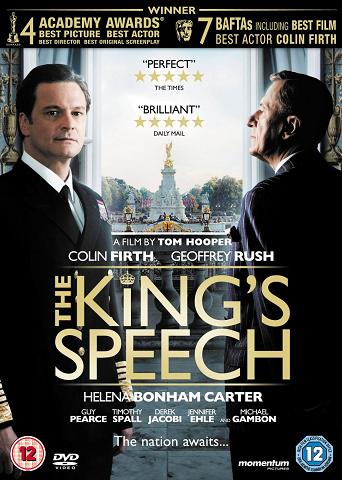 The King’s Speech is the story of the Prince of England, George ‘Bertie’, second son of the King. When his older brother falls in love with American divorcee Wallis Simpson, it becomes Bertie’s duty to become king and lead England forward into World War II. The only problem is that Bertie has had a terrible stammer since he was a young child. Through long hours of secret training to improve his speaking capabilities with Lionel Logue, Bertie ultimately overcomes his handicap, giving a speech heard across the world as England declares war against Nazi Germany.

The King’s Speech is the story of a man who grew to become England’s King George VI and father to the current Queen Elizabeth II. After George, ‘Bertie’s’, elder brother abdicates, it is up to him to assume the throne and become king. However, Bertie is widely considered unfit to be king as he has plagued by a terrible stammer since a very young age. Public speaking has always been something Bertie has dreaded, as well as his audience, so had always suffered through speeches at various events he was scheduled to appear at as Prince.

All of this is about to change. The timing couldn’t be better, as when Bertie is preparing to ascend the throne England finds itself on the brink of war. That means a lot of motivating speeches and official statements in the future, not to mention meetings with other foreign leaders and various diplomats. Bertie will have his hands full trying to capture the elusive trust and confidence of the general public. Gone are the days when that can be done simply by looking good and being able to lead an army into battle well.

Elizabeth, Bertie’s wife, enlists the help of speech therapist Lionel Logue, more for Berie’s self-confidence and general public speaking skills at large rather than with the idea that Bertie’s brother will indeed abdicate, forcing Bertie to become king. Though he doesn’t have any kind of medical degree, Lionel has worked as an elocution coach in the theater. The king to be and Australian commoner have a unique, somewhat rocky relationship. Bertie does not take well to being called by his first name by such a common man. It takes a long time, many speech lessons and a good deal of thought on Lionel’s part trying to understand the psychological reasons behind the speech impediment. All the while they keep Lionel’s speech lessons a secret from everyone – both the common people and the royal family.

When the time comes, Bertie becomes king. Soon after, in 1939, England declares war on Nazi Germany. It is time for Bertie’s training to come through and to prove himself as King. Bertie’s training has worked as he delivers a flawless speech, heard worldwide over the radio.