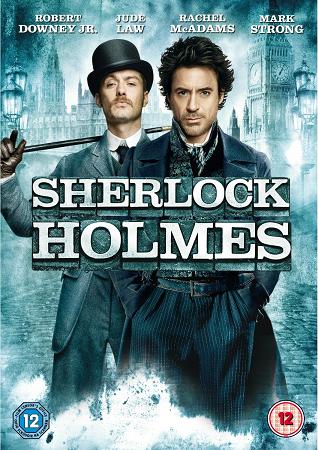 Sherlock Holmes, directed by Guy Ritchie, is a 2009 film based on the character of Sherlock Holmes originally created by Sir Arthur Conan Doyle. Holmes along with his friend Dr. Watson and a former adversary, Irene Adler, are drawn into a case involving a series of murders in London somehow connected to Lord Blackwood, a villain that was recently executed but is somehow still stalking the streets of London. Through the mingling of dark arts and new technology, Blackwood has plans to take over the world, and can only be stopped by Holmes cunning intellect.

It is 1891 when detective Sherlock Holmes and his partner Dr. Watson prevent a woman’s murder and stop a criminal who has already killed five others. Three months later, just as Dr. Watson is ready to move out of the flat he shares with Holmes, Lord Blackwood is sentenced to death. Soon after rumors begin of his presence in London, along with the killers grave being desecrated, another body being there in his stead. Drawn into a plot concocted by Blackwood, Holmes, Watson and their former adversary Irene Adler race to stop the madman before he overthrows Parliament, conquers the United States and then the rest of the world.

Holmes races to stop Blackwood, following a long trail of murders which leads him to Parliament and then to the yet unfinished London Bridge. When Holmes and Watson battle Blackwood’s followers, Irene Adler steal the cyanide that was to be used by Blackwood and flees. Holmes follows and soon he faced with Blackwood atop London Bridge. After a struggle, Blackwood is defeated and Irene speaks of a Professor Moriarty, one who is supposed to be just as cunning as Holmes himself.

Sherlock Holmes, directed by Guy Ritchie and based off of the character originally written by Sir Arthur Conan Doyal, first came to theaters on December 25, 2009 in the United States and on December 26, 2009 in the UK, Ireland and the Pacific with a sequel released December 16, 2011. The film met with high success and acclaim. It was nominated for two Academy Awards, Best Original Score and Best Art Direction, but did not win either.