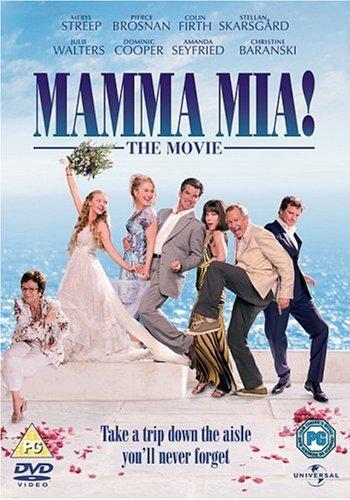 Set on a Greek Island and full of ABBA songs, Mamma Mia! is a film centered on the young Sophie, who is about to be married. Sophie has always dreamed of having her father walk her down the aisle, so when she finds out that any one of three men could be her father, she invites all three to her wedding. Sophie’s mother, Donna, doesn’t know that her daughter has read her diary, nor that she has invited the three men she hasn’t seen in more than twenty years.

Mamma Mia! is a heartfelt tale filled with the songs of ABBA. The twenty year old Sophie, daughter of former singer turned resort owner, Donna, has always dreamed of having her father walk her down the aisle. The only problem is that Donna was a single mother and she has never met her father. When she becomes engaged, Sophie secretly reads her mother’s diary and learns that any of three men could be her father.

She invites all three to her wedding, the architect Sam Carmichael, the banker Harry Bright and a sailor named Bill Andersson. Sophie is convinced that she will know her father as soon as she sees him. It doesn’t take very long for her to realize that was just wishful thinking and that she has no idea who is her real father. Bill, Harry and Sam all think that they are her real father, quickly realizing why it was that they were invited. Donna, however, isn’t so pleased with the turn of events when she finds that all three men have been invited without her being any the wiser and begins to get stressed while Sky, Sophie’s fiancé, becomes rather upset with his bride to be’s attitude. Ali and Lisa, Sophie’s bridesmaids help her in deciding which of the three is her true father.