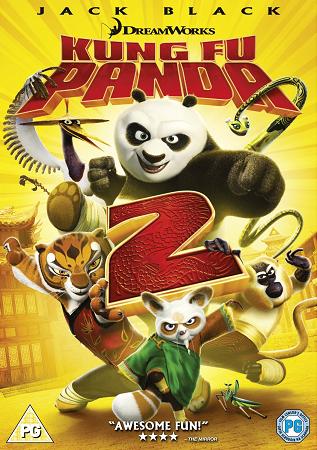 With the widespread success of the first Kung Fu Panda, the famous Furious Five have returned to protect the Valley of Peace with the help of Po (Jack Black), their sixth warrior. In the beginning, however, the movie reveals an incident that occurred thirty year earlier in Gongmen City. At the time, the rightful heir of the peacock clan, which ruled the city, was Lord Shen (Gary Oldman), a mischievous character who wanted to develop fireworks into powerful weapons which he could use to conquer and control all of China with. One day, the court’s oracle foretells that “a warrior of black and white” will overpower Lord Shen, destroying his plans to become ruler of the country. In order to stop the prophecy from coming true, Shen went on a rampage, slaughtering all pandas and destroying their villages. Because of his appalling and violent behavior, Shen’s parents refused to allow him to become ruler of Gongmen City by banishing him forever. Upon leaving, Shen swears that one day, he will have his vengeance.

Fulfilling his long-life dream, Po has become the Dragon Warrior but discovers that he still has not found peace within himself, the final step to master himself. One day, while Po is fighting the bandit wolves that work for Lord Shen, he is distracted by a symbol that causes him to have a flashback about this panda mother, whom he has never known. In this time, the wolves are able to escape the kung-fu warriors’ clutches. Confused about his identity, Po asks his father, Mr. Ping (James Hong), a stork, about where he came from and who is real parents were, but Ping doesn’t know anymore about his origins than Po does as he found him when he was a baby in a radish crate in front of his store. Master Shifu (Dustin Hoffman) soon learns that Gongmen City has been taken over, while the kung-fu council leader, Master Thundering Rhino, has been murdered by Lord Shen and his forces. As promised, Shen developed a cannon that harnesses the power of fireworks. With the use of this machine, all of kung-fu tradition is now in danger of being wiped out. Trying to free the remaining two council members, Master Storming Ox (Dennis Haysbert) and Croc (Jean-Claude Van Damme), Po and the Furious Five are shocked to learn that the masters don’t want to escape imprisonment and have given up the fight against Shen and his unbeatable weapon. Here, the leader of the wolves stumbles upon Po and his friends, who have still not shown themselves to Shen. Although they end up being captured, they manage to escape and attempt to demolish the deadly weapon. Once again, Po allows Shen and his forces to get away while he is distracted by another flashback.

Unable to stay quiet, Tigress (Angelina Jolie) confronts Po about his carelessness. Po opens up, telling her that he can remember Shen in his early childhood memories with his real parents but doesn’t know why he is there. Although Tigress understands his confusion, she tell him that he can’t continue going on the mission with them as it has become too dangerous and personal. Still, Po wants to speak to Shen, perhaps the only one who knows what happened to his parents. While attempting to confront Shen, Po accidently ruins the Furious Five’s sneak attack, and they are held captive. The malicious Shen tells Po, before blasting him away, that his parents deserted him as a child. Waking up, Po realizes he is still alive and has been saved by the same fortune-teller who prophesized Shen’s fate many years ago. She guides Po into remembering his past and embracing it. As such, Po is able to find inner peace after recalling that, in fact, his parents gave their lives so that he could survive. Returning to save his friends in Gongmen City, Po is joined by the great Master Shifu, Ox, and Croc to fight against Lord Shen. Having attained inner peace, Po is able to avoid the destructive cannon fire and redirect it back at Shen. Although Po tries to help Shen by encouraging him to also let go of the past and his hatred, he fails to convince him, and Shen is ultimately killed by his own hand. After the danger has finally passed, Po goes back to his home in the Valley of Peace and embraces Mr.Ping as his real father. Meanwhile, somewhere far away, before the movie ends, viewers are shown that Po’s biological father is actually alive and healthy in a hidden village along with other pandas.