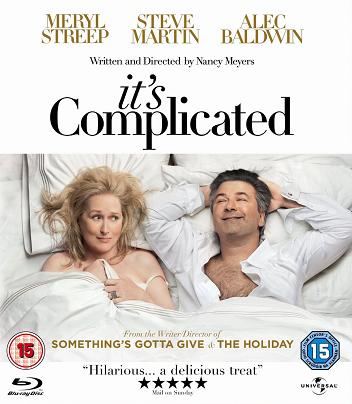 Jane, played by Meryl Streep, is a successful baker and has her own shop in Santa Barbara, California. A divorcee for ten years, she has spent her years as a single mother raising three children. Finally all grown-up, she finds the time to date and enjoy her own personal life. However, at Luke’s (her son’s) graduation in New York, she ends up in bed with the last person she would have expected, her ex-husband! Jake, played by Alec Baldwin, is a succesful attorney who spent his marriage with Jane being absent. After his affair with a much younger woman, Agness (Lake Bell), he ends up leaving the mother of his children and marrying Agness. Ten years later, the roles have changed as Jane becomes his mistress. Their affair doesn’t end but rather continues once they get back home to Santa Barbara. While Jake apparently has no qualms about the affair, Jane is torn apart for helping him cheat on his wife.

But that isn’t the only thing Jake has been doing behind his wife’s back. Because Agness has been forcing him to regularly visit the fertility clinic, he is secretly taking medication with a side effect of reducing his sperm count. At a lunchtime rendezvous with Jane, Jake collapses in the hotel room and a doctor is called. During this incident, they are spotted together by their daughter’s fiancé, Harley (John Krasinski). Of course, their children still have no idea that their parents are having an affair. Harley, however, chooses to stay silent on the matter. Things start to get even more complicated when Adam, played by Steve Martin, enters the picture. After having gone through his own divorce recently, he starts to fall in love with Jane while remodeling her home. For Luke’s graduation party back home, Jane invites Adam to come along. Here, things get really interesting as Adam picks her up for the party, only to find her giggling and high after smoking a joint that Jake had given her earlier. Later on in the evening, they share a joint and Adam also gets high! At this point, Jake is jealous and pushes Jane to smoke some more. Now, all three adults are high and at their own party!

After the party, Jane takes Adam to her bakery for some delicious munchies. As she bakes chocolate croissant, they spend hours together and get along with each other quite well. Later on, Jake and Agnes separate. Although it is unknown for what reason, Agness does suspect earlier on that there is something go on between him and his ex. In time, Adam discovers about the affair and can’t bear to continue seeing Jane as he is afraid of being heartbroken again. Eventually, the children also learn about their parents’ sneaking around and are disappointed in the both of them. After their messy divorce ten years ago, it is for the best that they don’t continue their relationship. Jane and Jake end their fling on friendly terms, and each goes their separate way. At the end of the film, however, there is a hint at Adam and Jane getting back together as he returns to continue remodeling her house.