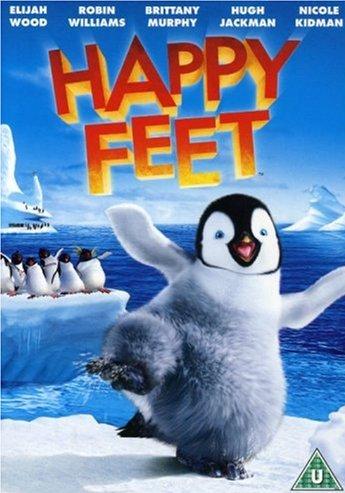 Happy Feet is the story of Mumble, a penguin that, instead of singing like the other penguins, is able to dance. But Mumble is ostracized when he interrupts the class graduation song with his terrible singing. After some adventure, Mumble meets The Amigos, a group of misfit penguins of a different species. After many more adventures with The Amigos, Lovelace the prophetic penguin and a meeting with the ‘aliens’ Mumble’s family and friends finally learn to accept him for what he is.

Memphis must take care of his and his mate Norma Jean’s egg while she’s out with the other females fishing. The egg gets away from him, though Memphis recovers it, with the only damage being Mumble’s blue eyes, everlasting chick down, and terrible singing voice. Because of his terrible voice Memphis is ostracized by friends, classmates and fellow penguins alike.

Eventually Mumble goes on a journey, cast away from his fellow penguins. During his journey he meet The Amigos, a misfit group of smaller penguins who tell him that his talent, dancing, isn’t something to be dismissed as the other penguins have been telling him. After accidentally starting an avalanche, Mumble discovers an excavator machine and decides to go out and find the ‘aliens’ which he keeps hearing about.

All of his friends and family thing he is crazy, except for his girlfriend Gloria and his mother. They blame the lack of fish on Mumble, saying that he has displeased the Great ‘Guin and this is their punishment. It isn’t until Mumble is taken by and returns with a tracking collar that the penguins believe him. After teaching the other penguins to dance, they are saved. The human researchers have discovered the dancing penguins and begin to remove all of the fishing equipment in the area, feeling the need to preserve this odd bit of wildlife.