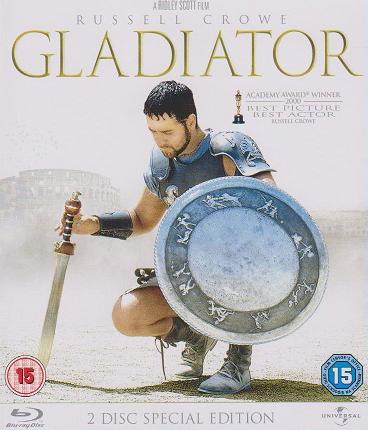 Gladiator is a historical film directed by Ridley Scott that attained much appraisal and received many awards, including five Oscars. Russell Crowe brilliantly portrays the loyal General Decimus Maximus in 180 AD. After leading the Romany army in war against Germanic tribes, Maximus comes out victorious as he ends a long war on the Roman frontier and earns the respect of the elderly Emperor Marcus Aurelius (Richard Harris) back home. Even though the dying emperor has a son and right heir, Commodus (Joaquin Phoenix), his last wishes are to grant temporary leadership to Maximus hoping that power will eventually be reinstated to the Roman Senate instead. When Commodus learns that the throne will go to Maximus, he secretly murders his father and ensures the seat for himself. Before Maximus has the chance to go after the new self-declared emperor, he is betrayed to Commodus by his friend, General Quintus (Tomas Arana), who reluctantly follows the emperor’s orders for the execution of Maximus’s wife and son.

Although Maximus manages to escape his fate, he finds that his family hasn’t been spared. Mourning for his loss, he buries them and passes out unconscious only to be found by a slave trader. He is taken captive and sold at Zucchabar to a gladiator manager, Proximo (Oliver Reed). As a gladiator, Maximus is forced to fight for his life in arena tournaments for the audience’s amusement. During this time, he also befriends fellow gladiators, Juba (Dijmon Hounsou) and Hagen (Ralf Möeller). Maximus attracts enough attention because of his remarkable victories in the arena to be contracted to fight in the prestigious Roman Colosseum in tribute to the Battle of Carthage, which the new emperor Commodus will be attending. Hidden by his helmet, Commodus doesn’t notice that the heroic gladiator is in fact his enemy.
Maximus leads his group of gladiators into an epic battle against an opposing force of ferocious chariots and archers and comes out victorious once more. He earns enough admiration from the audience that by the time he is forced to remove his helmet and reveal his identity, the crowd demands to have his life spared. At this point, the shocked Commodus can do nothing but conciliate and please his people by allowing him to live. Commodus, however, is not pleased with Maximus’ new found fame and security in the arena. Although Maximus is put up against the undefeated gladiator, Tigris, along with released tigers, he manages to defeat them and come out even more glorious and popular. Now, the emperor can no longer murder Maximus without igniting trouble from the people and making him a look like a martyr.

After the fight, Maximus learns from his former servant, Cicero, that the army remains loyal to him, giving him the opportunity to conspire safely against the emperor. Even Commodus’ sister, Lucilla (Connie Nielsen) helps him plot the usurpation of the throne from the unjust hands of her brother. They are also joined by the Roman senator, Gracchus (Derek Jacobi), who agrees to help them topple the throne. However, when Commodus starts to get suspicious, he indirectly threatens Lucilla’s younger son, forcing her to reveal their plans. While Maximus is breaking out of the gladiator school, Commodus’ guards are sent to attack it. Although Maximus reaches the city walls to meet Cicero, he falls into a trap and is finally captured.
Not being able to risk Maximus’ survival, Commodus arranges to duel with him but stabs him with a dagger before entering the arena. When Maximus manages to disarm him, Commuodus demands for his sword but General Quintus refuses to obey while telling the soldiers also stand-by. As he tries to get the hidden dagger, Maximus has the chance to execute the emperor, and the crowd doesn’t even know who the gladiator is! Wounded and bleeding, Maximus tells Lucilla that his dying wish is to restore Gracchus’ position, return power back to the Roman Senate, and give freedom to the slaves. At last, Maximus is able to honor the memory of Marcus Auerlius and reunites with his wife and son in the afterlife.