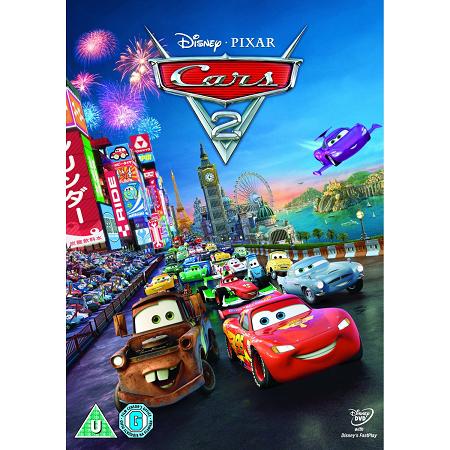 Cars 2 features the return of main character Lightning McQueen, his friend Mater, and girlfriend Sally Carrera. This time Lightning joins the “World Grand Prix”. Evil mastermind Professor Zundapp is sitting on an untapped oil well, the largest in the world. Lightning, with the help of Mater and new friends Finn McMissile and Holley Shiftwell, they must foil Zundapp’s plot to blow up race cars with the new biofuel Allinol during the World Grand Prix.

Racing Champion Lightning McQueen returns to Radiator Springs to see best friend Mater and his girlfriend Sally where he learns of a race he’s never partaken in before, the World Grand Prix. But this isn’t just a race, it’s also a way to promote the new biofuel Allinol.
The only damper in the plan is Professor Zundapp and the evil mastermind behind him. Owning the largest oil reserves in the world, Professor Zundapp is a little less than thrilled with Miles Axelrod’s new biofuel and its incorporation into the this world event and plans to light the biofuel in several race cars during the race. The resulting explosions will cause the public to lose faith in the biofuel and, with no other choice, turn to his own oil supplies.

But Mater and new friends Finn McMissile and Holley Shiftwell are on the job, infiltrating secret meetings and doing everything they can to ensure the safety of Lightning and the others in the race. Mater and the others are captured when they hear of a bomb being planted on Lightning during the next scheduled race. As it turns out, the bomb was planted on Mater, who is warned just in time and flees to safety in an effort to protect his friends. Completely unaware of what is happening, Lightning follows his friend trying to make amends.
Mater, Lightning and their new friends are all fine in the end. The Allinol fuel in Lightning’s tank was switched for another kind, making sure that Lightning was safe from harm. Mater declines an invitation to continuing spying with Holley and Finn, and everyone returns home to Radiator Springs.