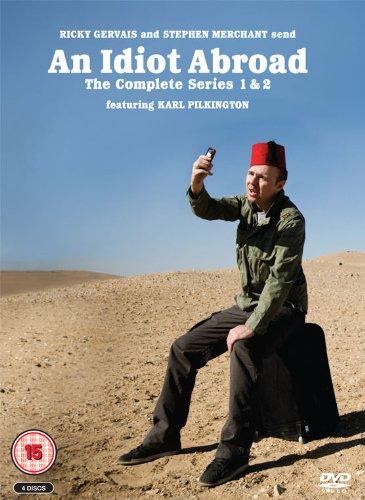 An Idiot Abroad broadcasts on Sky1 but also has its own spin-off book published by Canongate Books. In addition to the program and book of An Idiot Abroad, there is also an official podcast that comes with them. This travel documentary television series definitely takes quite a different approach than most ordinary travel shows and keeps things much more interesting! It is created by and features Karl Pilkington, but it also features his former radio show colleagues Stephen Merchant and Ricky Gervais. While they stay in London plotting and monitoring his travels, Karl moves across the world. The irony of both the television series and book is that Karl Pilkington actually has no interest in global travel. Although this may seem like the wrong way to go about a documentary, Ricky Gervais claims the opposite! He believes that having a person who knows little about the places he will visit and the cultures he will encounter makes it a much more real documentary than other predetermined shows. Indeed, An Idiot Abroad records Karl’s honest reaction to the places he travels to, the situations he finds himself in, and the cultural differences as well as similarities he discovers in those countries.

The first episode of An Idiot Abroad aired on Sky1 on September 23, 2010. From the very first show, it achieved an official audience figure of 1,241,000. These were the best viewer figures for a debuting show on Sky1 since Terry Pratchett’s Going Postal, which was released four months earlier. Ever since its arrival, the series has increased its audience numbers throughout. By episode 7, it became Sky1’s most watched program as it was able to attract 1,918,000 viewers. The series was originally going to be titled “Karl Pilkington’s Seven Wonders” as that is travel adventure of the first series. However, because not many people would recognize his name, they chose to give it a more comical name. Although the Colosseum in Rome is one of the New Seven Wonder of the World, Ricky and Stephen decided that the country would be too familiar for Karl and decided to put him on a path to visit China, India, Jordan, Egypt, Mexico, Peru, and Brazil. The last show of the season features Karl being quizzed by Ricky and Stephen about the countries he visited to see if he actually learned anything!

The theme of the second season is Karl going on a trip to fulfill “the bucket list”, things to do before one dies. However, Karl Pilkington agrees to do the show on the condition that he gets to choose what to do. He also demands for proper toilets this time around! But the guys back home, Ricky and Stephen, go behind his back and give him a couple of surprises to keep things interesting. Once more, Karl has no idea about his destinations. In this season, he visits even more places and makes many detours on the way. The show returned on September 23, 2011. After it opened the season with 2,659,000 viewers, it became the most viewed program on Sky1 since 2005. There is more to come as Ricky Gervais has announced that in winter 2012 a special will be aired featuring Warwick Davis, an English actor mainly known for his leprechaun and other mythical roles because of his dwarfism condition. It will also have a very comic title, An Idiot Abroad: The Short Way Round.