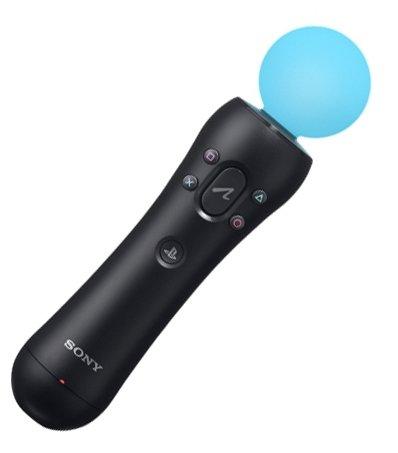 Thanks to the advanced integrated motion-detecting sensors and the PlayStation Eye digital camera, all of your movements are mirrored on the screen, with incredible Blue-ray graphics, no less. Taking gaming to a whole new level and play games the way they should be played! Use the Move while playing head to head with a friend, while playing multi-player games online, and more! There is no limit to the fun that this new controller will provide!

The Move takes the PS3 gaming experience to new dimensions by mixing high definition, realistic gaming with intuitive, accurate control. When the PS Move navigation controller, the PS Move motion controller, and the PS Eye digital camera are combined, the game play is enhanced ten-fold, taking you into the midst of the action and allowing you to experience the game the way it is meant to be experienced. And this is only possible on the PlayStation-3 gaming console. In addition, tons of new “Move-compatible” games are on the way, so get ready for countless hours of fun!

Used in conjunction with the PS Eye digital camera to track your movements with utmost accuracy.
Combines the button actions of the DualShock 3 and the Sixaxis wireless controllers.
Sleek, compact, and wireless.
Integrated rechargeable battery. .
Enhanced motion sensors enable the detection of both fast and slow movements
The Sphere’s light gives you enhanced visual feedback while playing.
Despite being wireless, is able to provide vibration feedback.
Wireless gaming via bluetooth technology.
Up to 4 motion controllers can be used with a single PS3 gaming console at the same time.
Connect the controller to the PS3 to charge and continue playing as you would with a normal wired controller.

Using some of the most capable motion sensors ever used on motion controllers, and in conjunction with the PS Eye digital camera, every one of your movements is mirrored on-screen in incredible Blu-ray high definition graphics. You can now take gaming to a whole new level, as well as bring in your entire family so that you can all share the fun. The PS Move controller is available as a standalone system. This is excellent news for PlayStation-3 owners who have a PlayStation Eye digital camera at their disposal already, not to mention the many fans of the PS Move who are anticipating impatiently for the chance to play their friends in online multi-player games, wirelessly, and with the vibrating feature available once again. In line with the release of the PS Move and the PS Eye, both Sony and private game developers are working on a whole line of games that will take this advantage of this new controller and bring in tons of fun to new gamers and old-school gamers, alike.